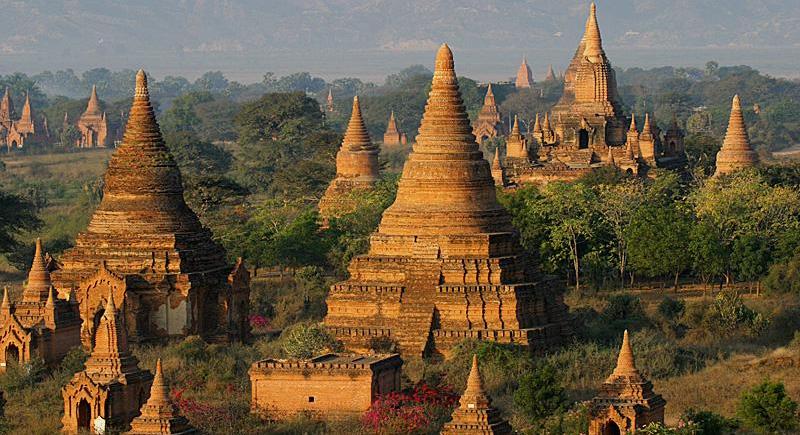 Myanmar, also known as Burma, is one of the most magical places in Asia. Bordered by Bangladesh, India, China, Laos and Thailand, Burma had been out of all foreign influence after its government decided in the second half of the 20th century to keep the country isolated from its neighbors.

Today, the country is open to foreigners, but it doesn’t have a large number of tourists and industrial traffic remains nonexistent.

Its capital (Yangon) is full of trees, lakes and green land. Victorian buildings built by the British more than a century ago, are mixed in with the street markets. In the city, there is a street where you can find all the writers, a street with all the dentists, a street with the people selling traditional medicines, and more.

The hills are full of golden pagodas, but the most impressive one is the old Shwedagon pagoda. Locals go up the hill at sunset, when the temperature is cooler. There are elevators, but it’s recommended to walk up the 104 steps barefoot. On top of the pagoda are 800 kilos of gold and 5000 precious stones surrounded by the smells of incense and jasmine flowers. Men and women wear a cotton skirt knotted around their waist. Men wear a black jacket, and women put fresh flowers on their hair. They usually go to the pagoda with their family and friends, and once there, they pray, talk, rest or eat.

Burmese food is highly influenced by India and China. A typical meal has meat curry with rice, soup and different vegetables. Curry is usually made with garlic, ginger, cilantro, peppers, onion and oil. They also eat fish and shrimp, and salads with mango and bamboo sprouts.

Two other cities, Mandalay and Bagan, still live in the 19th century. Mandalay was the capital city and is still the cultural center full of art and traditions. It used to be called “the gold city” and it has many palaces and pagodas all around. Every day at sunrise, it’s normal to see thousands of monks asking for food in exchange for good karma.

Bagan, on the other hand, is divided by the Ayeyarwady River, and for twelve centuries it saw fifty-five different kings. It is said that Bagan is where the Burmese civilization was born. However, in only two battles against Mongolian troops the city and its culture were destroyed. The widening river, along with earthquakes, has made Bagan a city of ruins, even though a hundred temples still remain intact.

In any case, when someone contemplates the sunset from the top of one of its pagodas, there is no other place in Asia more romantic and peaceful than this one, and visitors should not miss the opportunity of seeing this wonder from an air balloon too.

Heat vegetable oil in large skillet over medium heat and sauté garlic until brown, or for 2 minutes. Remove garlic from oil, reserve oil and set garlic aside.